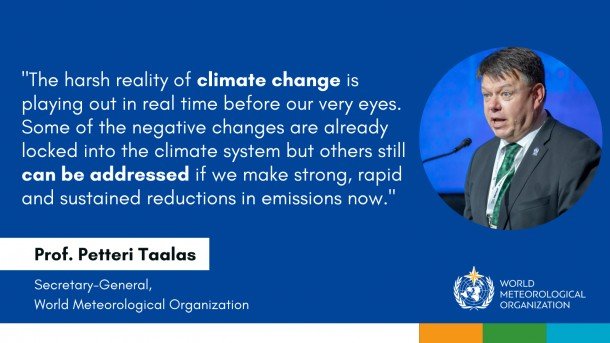 WMO organized the First World Climate Conference in 1979 to establish IPCC. The risk of climate change caused by growing consumption of oil, coal and natural gas was recognized by the meteorological community. IPCC has been working under WMO and UNEP since then, and WMO has been proud to host the IPCC secretariat.

Now we are publishing the physical science part of the Sixth Assessment Report, which is summarizing the results published in peer-reviewed scientific literature during the last eight years. I would like to thank the hundreds of authors and reviewers of this massive report, and especially Valerie Masson-Delmotte and Panmao Zhai who have been leading the work, and have devoted several years of their career for IPCC.

You will soon hear the main findings of the report. The key messages are still the same as in the first IPCC report which was published already in 1988, namely:

The report published today echoes the same messages with much higher urgency. Climate change is already more visible and the emissions have grown more rapidly than we ever expected in 1979. I had a chance to follow this personally as a scientists since 1980s.

Natural variability has always been causing weather extremes, and will do so also in the future.

The Tokyo Olympic Games were just closed yesterday. By using sports terms one could say that the atmosphere has been exposed to doping, which means that we have begun observing climate extremes more often than before.

That means record breaking temperatures, drought and forest fires observed also this year in Greece, the Mediterranean and California. We have more water vapor in the atmosphere, which has led to severe flooding problems as observed in Central Europe and China recently. The warming of the oceans has affected the frequency and area of existence of the most intense tropical storms.

Have we lost the hope? No and yes. According to this report we are still having a chance to stop the negative climate trend during the mid 21st century by especially limiting the use of fossil fuels and by stopping deforestation.

Some changes will continue for centuries or even thousands of years, like sea level rise, melting of glaciers and shrinking of the Arctic ice and snow cover.

The report underlines the urgency to enhance the ambition level of climate mitigation. We are not yet heading towards 1.5-2.0 degrees warming by the end of this century.

At the United Nations, our aim is to reach 1.5° C warming level which would be best for the future of mankind and the biosphere. Now we are heading towards 2-3° C warming instead.

We have received encouraging pledges by several countries, which would mean 2.1° C warming if materialized as promised. This is not enough to avoid several harmful impacts, like loss of food production capacity, water shortages, extremes heat, forest fires, continued sea level rise, refugee crisis and negative impacts on world economy and biosphere.

Besides climate mitigation, it is essential to pay attention to climate adaptation, since the negative trend in climate will continue for decades and in some cases for thousands of years.

One powerful way to adapt is to invest in early warning, climate and water services. Only half of the 193 members of WMO have such services in place, which means more human and economic losses. We have also severe gaps in weather and hydrological observing networks in Africa, some parts of Latin America and in Pacific and Caribbean island states, which has a major negative impact on the accuracy of weather forecasts in those areas, but also worldwide.

The message of the IPCC report is crystal clear: we have to raise the ambition level of mitigation.

The forthcoming COP26 in Glasgow this November will be a critical milestone to combat climate change. By using sports terms again we need a spurt already during this decade, not just before the finish as we do at running competitions.


Back To All News