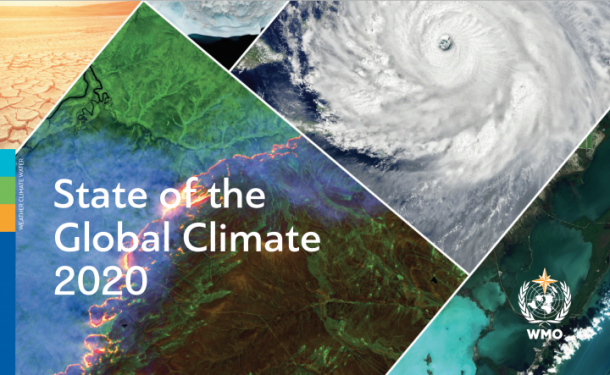 Extreme weather combined with COVID-19 in a double blow for millions of people in 2020. However, the pandemic-related economic slowdown failed to put a brake on climate change drivers and accelerating impacts, according to a new report compiled by the World Meteorological Organization (WMO) and an extensive network of partners.

The report on the State of the Global Climate 2020 documents indicators of the climate system, including greenhouse gas concentrations, increasing land and ocean temperatures, sea level rise, melting ice and glacier retreat and extreme weather. It also highlights impacts on socio-economic development, migration and displacement, food security and land and marine ecosystems.

2020 was one of the three warmest years on record, despite a cooling La Niña event. The global average temperature was about 1.2° Celsius above the pre-industrial (1850-1900) level. The six years since 2015 have been the warmest on record. 2011-2020 was the warmest decade on record.

“It has been 28 years since the World Meteorological Organization issued the first state of the climate report in 1993, due to the concerns raised at that time about projected climate change. While understanding of the climate system and computing power have increased since then, the basic message remains the same and we now have 28 more years of data that show significant temperature increases over land and sea as well as other changes like sea level rise, melting of sea ice and glaciers and changes in precipitation patterns.  This underscores the robustness of climate science based on the physical laws governing the behaviour of the climate system,” said WMO Secretary-General Prof. Petteri Taalas.

“All key climate indicators and associated impact information provided in this report highlight relentless, continuing climate change, an increasing occurrence and intensification of extreme events, and severe losses and damage, affecting people, societies and economies. The negative trend in climate will continue for the coming decades independent of our success in mitigation. It is therefore important to invest in adaptation. One of the most powerful ways to adapt is to invest in early warning services and weather observing networks. Several less developed countries have major gaps in their observing systems and are lacking state of the art weather, climate and water services.” said Prof. Taalas.