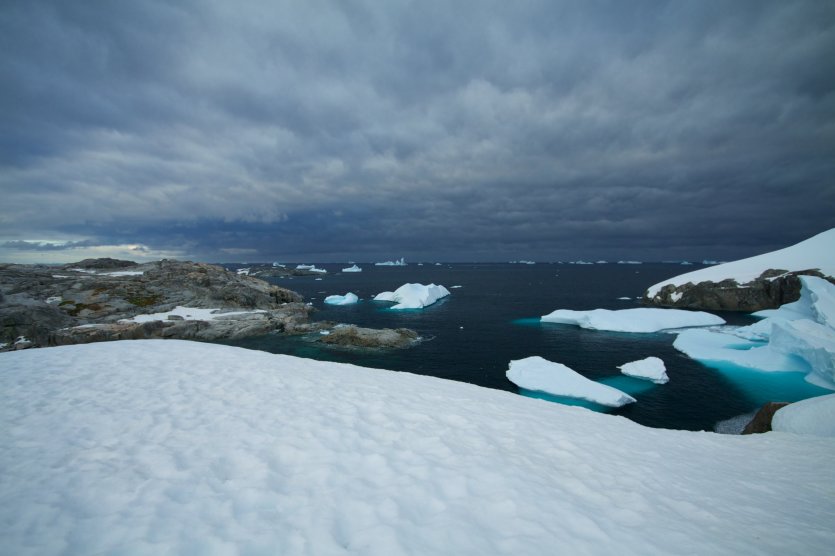 Weather systems responsible for transporting moisture from the tropics to temperate regions in the Southern Hemisphere have been gradually shifting toward the South Pole for the past 40 years, a trend which could lead to increased rates of ice melt in Antarctica, according to new research.

Atmospheric rivers are long, narrow jets of air that carry huge amounts of water vapor from the tropics to Earth’s continents and polar regions. The new study finds atmospheric rivers in the Southern Hemisphere are shifting due in part to ozone depletion, greenhouse gas emissions and natural variations in sea surface temperature.

This shift of atmospheric rivers may affect moisture and heat transported into Antarctica, said Weiming Ma, an atmospheric scientist at UCLA and lead author of the new study published in the AGU journal Geophysical Research Letters, which publishes high-impact, short-format reports with immediate implications spanning all Earth and space sciences.

“The most important implication of our finding is that due to this shift, more atmospheric rivers are expected to make landfall over Antarctica, which will have effects on the surrounding sea ice and glaciers on the continent,” Ma said.

A River from Thin Air

Atmospheric rivers form when warm, turbulent air from the tropics encounter cold fronts in mid-latitude regions. The narrow band between these two competing air masses grows thick with condensed water vapor as temperatures drop in the region of saturated air.

Sometimes measuring thousands of kilometers in length, these cloud systems can contribute up to 60% of the annual precipitation in some regions, such as California, Chile and western Europe.

In the past, scientists have used simulations to predict the future occurrence of atmospheric rivers over western Europe, showing that these weather patterns are likely to become more common under a warming climate. However, since their direction and movement are determined in large part by Earth’s jet streams, and as the westerly jet is expected to shift toward the North Pole in future climate models, researchers predict that atmospheric rivers will likely move poleward as well.

But the new study found atmospheric rivers in the Southern Hemisphere have already been following this trend, steadily creeping toward the South Pole for at least the last four decades. Using simulations based on multiple models and datasets spanning back to 1979, the researchers looked for broad trends and potential mechanisms that might explain observed patterns.

According to modeling results from the new study, at least part of the observed trend can be explained by increases in greenhouse gas emissions and ozone depletion over Antarctica and their corresponding effect on temperature gradients between the equator and South Pole; however, the shift also appears to be driven by natural, long-term changes in sea surface temperatures.

“We found evidence for cooling over the equatorial Pacific and the Southern Ocean, which is caused by a pattern called the inter-decadal Pacific Oscillation,” said Ma. “This is a natural pattern that takes place over multiple decades and one that isn’t driven by human activity.”

These cooler patterns in sea surface temperature pull the westerly jet stream further south, pushing atmospheric rivers along with them. It’s unclear exactly how this might affect rain and snowfall patterns over South America, but it seems likely that portions of Antarctica will experience increased rates of ice melt as a result, according to the researchers.

“Global sea level change depends critically on the fate of the Antarctic ice sheet, and that ice is impacted by how many atmospheric rivers hit Antarctica and how strong they are,” said Marty Ralph, the director for the Center for Western Weather and Water Extremes at the Scripps Institution of Oceanography, who was not involved in the new study.

While atmospheric rivers over East Antarctica have been associated with increased snowfall accumulation in some years, they seem to have the opposite effect on the other side of the continent. According to research published in 2019 that used a similar dataset, an average of only 12 atmospheric rivers a year make their way across the western portion of Antarctica, yet they contribute up to 40% of the summer ice melt in some areas and appear to be responsible for the majority of ice melt in winter and in high-elevation glaciers.

Large ice melts in West Antarctica are still fairly rare, occurring only a few times each decade. However, scientists warn that increasing temperatures due to global climate warming and the shifting occurrence of atmospheric rivers in the southern hemisphere will likely cause the frequency and severity of those melting events to increase in the near future.

Read story at AGU website
Back To All News