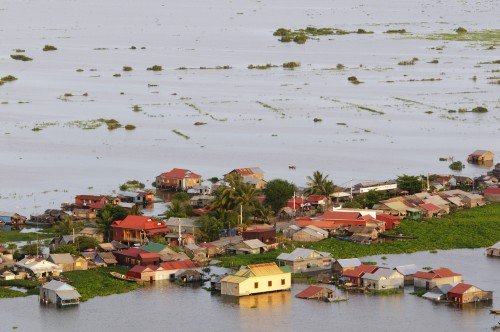 “We were inspired by the fact that the spread of epidemics and pandemics in communities has been studied by people in health sciences and epidemiology and other fields, and they have identified some principles and rules that govern the spread process in complex social networks,” said Dr. Ali Mostafavi, associate professor in the Zachry Department of Civil and Environmental Engineering. “So we ask ourselves, are these spreading processes the same for the spread of flooding in cities? We tested that, and surprisingly, we found that the answer is yes.”

The findings of this study were recently published in Nature Scientific Reports.

The contagion model, Susceptible-Exposed-Infected-Recovered (SEIR), is used to mathematically model the spread of infectious diseases. In relation to flooding, Mostafavi and his team integrated the SEIR model with the network spread process in which the probability of flooding of a road segment depends on the degree to which the nearby road segments are flooded.

In the context of flooding, susceptible is a road that can be flooded because it is in a flood plain; exposed is a road that has flooding due to rainwater or overflow from a nearby channel; infected is a road that is flooded and cannot be used; and recovered is a road where the floodwater has receded.

The research team verified the model’s use with high-resolution historical data of road flooding in Harris County during Hurricane Harvey in 2017. The results show that the model can monitor and predict the evolution of flooded roads over time.

“The power of this approach is it offers a simple and powerful mathematical approach and provides great potential to support emergency managers, public officials, residents, first responders and other decision makers for flood forecast in road networks,” Mostafavi said.

The proposed model can achieve decent precision and recall for the spatial spread of the flooded roads.

Using this model, researchers are able to monitor and predict the evolution of flooded roads over time, which will be vital to emergency managers, responders and residents. | Image: Getty Images
“If you look at the flood monitoring system of Harris County, it can show you if a channel is overflowing now, but they’re not able to predict anything about the next four hours or next eight hours. Also, the existing flood monitoring systems provide limited information about the propagation of flooding in road networks and the impacts on urban mobility. But our models, and this specific model for the road networks, is robust at predicting the future spread of flooding,” he said. “In addition to flood prediction in urban networks, the findings of this study provide very important insights about the universality of the network spread processes across various social, natural, physical and engineered systems; this is significant for better modeling and managing cities, as complex systems.”

The only limitation to this flood prediction model is that it cannot identify where the initial flooding will begin, but Mostafavi said there are other mechanisms in place such as sensors on flood gauges that can address this.

“As soon as flooding is reported in these areas, we can use our model, which is very simple compared to hydraulic and hydrologic models, to predict the flood propagation in future hours. The forecast of road inundations and mobility disruptions is critical to inform residents to avoid high-risk roadways and to enable emergency managers and responders to optimize relief and rescue in impacted areas based on predicted information about road access and mobility. This forecast could be the difference between life and death during crisis response,” he said.

“By doing this research, I realize the power of mathematical models in addressing engineering problems and real-world challenges. This research expands my research capabilities and will have a long-term impact on my career,” Fan said. “In addition, I am also very excited that my research can contribute to reducing the negative impacts of natural disasters on infrastructure services.”

This research is funded by National Science Foundation’s CRISP 2.0 Type 2 project in which Mostafavi is the lead principal investigator.

View full article
Back To All News