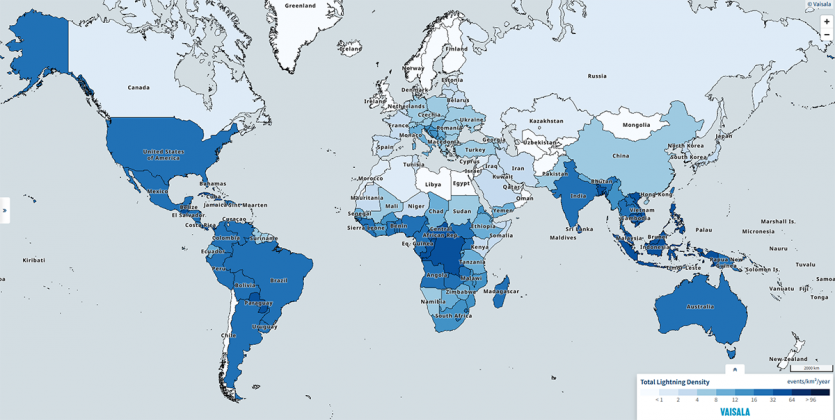 Lightning density maps for every country in the world

Did you know that Singapore has more lightning than any other country in the world? What do Ecuador, Senegal, and Nepal have in common? They all have 8–12 total lightning events per square kilometer per year. These numbers take into account the areas of the countries.

Vaisala provides professional lightning data services for national meteorological agencies and safety-conscious commercial organizations, all over the world, using our Global Lightning Dataset GLD360 and National Lightning Detection Network NLDN lightning detection networks that provide coverage of oceans and continents from pole-to-pole. Both networks provide the highest quality real-time and historical data, which can be made available to any organization today.

We want to share some of the insights the data has given us. You can find out more about lightning around the globe by visiting the fascinating new global total lightning density map from Vaisala here. Never before has it been possible to reliably compare lightning on a national basis everywhere.

On this map, you can scroll around the world and see the total lightning density for each country. Total lightning includes both cloud-to-ground strokes and in-cloud pulses. Move your cursor in any direction and zoom in and out. Click on each country for the average density for the last five years. Also, click on the colors in the expanded color bar to see all of the nations within different density ranges. In the U.S., you can also zoom down to each state and every county to see their lightning densities in detail.

This map is the result of detection by the globally consistent professional-grade Vaisala GLD360 network. Over the U.S., total lightning events are from the high-precision Vaisala NLDN.

GLD360 is by far the best-in-class lightning detection network and detects more than two billion events globally every year in real-time. This breakthrough technology allows detection anywhere around the world, with no gaps over land or sea, and an average location accuracy of one kilometer.

GLD360 is a single network of extremely sensitive sensors strategically located around the world, along with highly sophisticated processing software. The result is very long-range lightning detection that eliminates any gaps in coverage and provides lightning data with granularity and precision, to deliver extreme value even on a much smaller scale for individual countries or geographic areas. The data is valuable for climatological studies, site analyses, and real-time warning, as well as for commercial activities such as airport operations and mining.

Many of the differences among countries are surprising and never seen before in nation-by-nation comparisons. While equatorial countries tend to have more lightning, there are important differences that depend on each country’s location relative to oceanic coastlines, mountain ranges, monsoons, and other global-scale meteorological factors such as the subtropical high-pressure belt. Some countries straddle large ranges of lightning density. For example, Australia, Brazil, Chad, and India are shown in one color each but actually have very wide differences in lightning within each of them, which we expect to reflect in later versions of this map.

Roam around the world and explore the map for yourself to see these fascinating differences! What is the total lightning density for your country, or county in the U.S., and how does it compare with others?

To complement the Annual Lightning Report, here are some of the big lightning stories you may have missed last year.