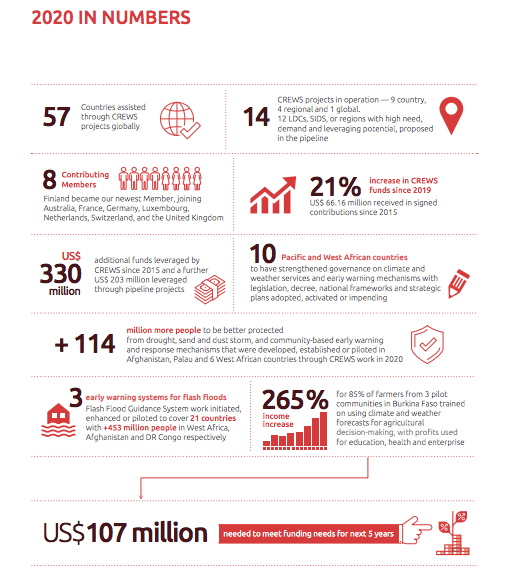 The Climate Risk and Early Warning Systems (CREWS) Initiative is mobilizing an additional US$ 28 million to deliver early warning systems in Least Developed Countries (LDCs) and small island developing States (SIDs) to protect lives and livelihoods from the impacts of severe weather.

This decision was announced at the 13th Steering Committee Meeting of the Climate Risk & Early Warning Systems (CREWS) initiative on 17 June.

Countries and regions that have early warning systems as a priority in their climate change nationally determined contribution and adaptation plans are identified as priorities for future funding decisions based on their high level of eligibility, ownership and readiness.

The decision to provide financing of US$ 28 million was made possible thanks to new contributions this year to the CREWS Trust Fund by member countries and a recent announcement by the European Commission, Directorate-General for International Partnerships of a Euro 10 million commitment to the CREWS Initiative.

A further encouraging decision for least developed countries, is the proposed establishment of a new financing window to address critical, time-bound climate-relevant early warning services. The proposed CREWS Strategic Support Window will address emerging needs and deliver a flexible array of fully funded technical and knowledge services by experts and advanced national meteorological and hydrological agencies. This proposed new service will be available to countries by the end of the year.

Countries that contribute to the CREWS Initiative are Australia, Finland, France, Germany, Luxembourg, the Netherlands, Switzerland and the United Kingdom.

The meeting was Chaired by the Government of France, Climate Ambassador Stéphane Crouzat stated the need to scale-up commitments and action on early warning systems to reach people who need them most as an effective way to adapt to climate change.

As of year-end 2020, CREWS projects covered 57 countries globally and the CREWS Trust fund has directly allocated more than US$ 51.5 million in project funding for country, regional and global projects.

CREWS is a unique climate action programme which aims to significantly increase the capacity to generate and communicate effective impact-based, multi-hazard, gender-informed, early warnings and risk information to protect lives, livelihoods, and assets in Least Developed Countries and small island developing States. It is implemented by the UN Office for Disaster Risk Reduction (UNDRR), the World Meteorological Organization (WMO) and the World Bank, through the Global Facility for Disaster Reduction and Recovery (GFDRR).