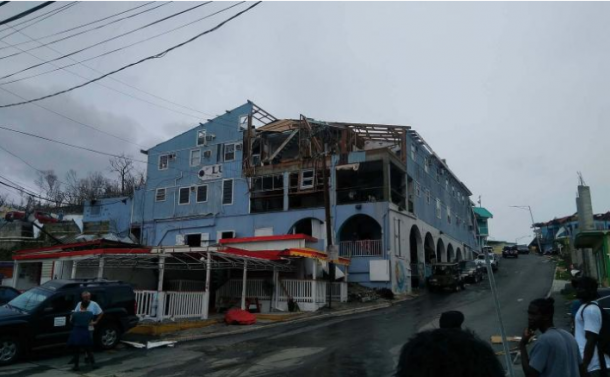 The Caribbean is gearing up for yet another active Atlantic hurricane season, compounded by the continuing challenges and constraints of the COVID-19 pandemic and the aftermath of a major volcanic eruption.

The triple whammy of hydro-meteorological, health and geological risks has highlighted the need for multi-hazard early warnings in islands on the front-line of climate change and its many impacts. It also once again underlines the need for regional cooperation, which is embodied by WMO’s Hurricane Committee for North and Central America and the Caribbean (Regional Association IV).

Many parts of the region are recovering from the record-breaking 2020 Atlantic hurricane season, which had a record-breaking 30 named tropical storms, including 13 hurricanes and six major hurricanes. The Caribbean was also badly hit during the 2019 and – in particular – the 2017 season.

“Developing countries and small islands in the Caribbean and Central America are increasingly vulnerable to the impacts of tropical cyclones, which can overturn years of socio-economic development in a matter of hours. In 2020, we saw this once again with tragic effect,” says Evan Thompson, President of WMO’s Regional Association IV.

“We cannot prevent this incredible force of nature, but we do have the power to minimize the loss of life and property through cutting-edge forecasts and warnings and strong regional coordination and cooperation,” says Mr Thompson, who head’s Jamaica’s national meteorological service.

Caribbean Islands with steep terrain are at high risk for landslides and mudflows from heavy rains and volcanic debris.  Hurricane winds are strongest at higher altitude than at the surface, so higher terrain has the additional wind hazard.

Meteorological services will be working closely with health authorities during the 2021 season to adjust the preparedness and readiness plans to the new circumstances and challenges to ensure an effective health response during this complex scenario.

The Pan-American Health Organization will discuss contingency plans at a meeting on 10 June.  Challenges for the health sector include the difficulties guaranteeing social distancing and public health measures in overcrowded shelters, resulting in a higher risk of COVID-19 transmission, as well as an increased demand for health services for a larger group of vulnerable population. This is in addition to the traditional risk of destruction of health facilities and increased demand as a result of extreme weather.

To add to the complexities, the recent eruption of La Soufrière volcano on St. Vincent caused displacement and disruption on the Caribbean island, destroyed infrastructure and the entire economic base, and generated volcanic debris, with ashfall adversely affecting nearby Barbados, in particular, and Saint Lucia.  The ash was transported as far as Europe and Asia.

The RAIV Hurricane Committee virtual session in May heard how the Meteorological Service of St Vincent and the Grenadines provided volcano support to the National Emergency Council and National Emergency Management Organization (NEMO), tailored forecasts were provided to the University of the West Indies Seismic Research Centre for onsite activities, anticipating rain-soaked ash, disruptions to the water supply and early warnings on heavy rain events, among other things.

Barbados Met Service (BMS) supported St Vincent and the Grenadines with forecast and warnings and by requesting rapid scan of the GOES Satellite over the volcano, in coordination with the Caribbean Meteorological Organization Headquarters. .  The BMS is also critical to their national multi-hazard response, where they provided impact-based forecasts and warnings (e.g., guidance to the Barbados Water Authority on significant rain events and how to manage high water demand for ash removal in areas still recovering from drought; wind forecasts for airport cleanup; and information on wind and rain to parent Ministry of Agriculture). The BMS is expected to automate future tsunami alert messages.

A considerable amount of ash was transported into drainage wells, thus increasing the potential for community level flooding during the rainy season. In addition to ash covering many beaches, lahar flows and flood discharges has brought considerable amounts of material to the marine environment which will need to be addressed through modeling and monitoring.

Lightning causes many deaths, injuries, and property damage each year. Additionally, the economies of least-developed countries, such as those in the Caribbean and Central America, suffer due to property loss, damage of electrical and electronic equipment and systems, downtime due to service outages and data losses and problems in power quality.

The first-ever Symposium on Lightning and Lightning Safety Awareness, hosted jointly by the Caribbean Meteorological Organization (CMO) and the World Meteorological Organization (WMO) on May 19-20, brought together lightning specialists from a wide range of disciplines. The event was part of CMO’s initiative to foster collaboration to better understand lightning risk and improve safety in the Caribbean and the Inter-Americas to reduce lightning deaths, injuries, and property damage.

“The symposium was a pioneering forum for exchanging information and resources on lightning and its impacts” said Dr. Arlene Laing, Coordinating Director of the CMO Headquarters and organizer of the event. “With support from the WMO, we were able to bring together specialists from across the world to share presentations about lightning safety education and awareness, medical impacts of lightning and injury prevention, lightning protection measures, weather forecast applications, lightning detection, and lightning as an essential climate variable,” explained Laing.