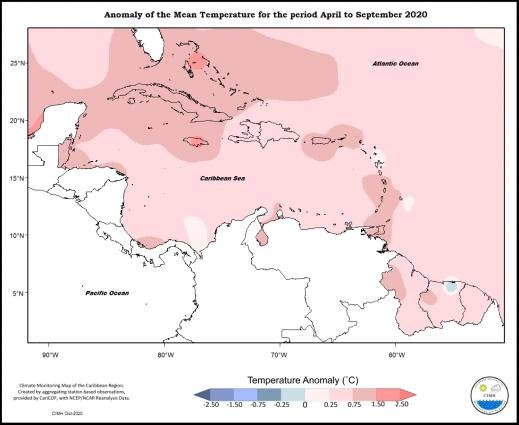 A number of heat records were broken in the Caribbean in 2020. Notably, in September, Dominica, Grenada and Puerto Rico broke their national/territorial all-time high temperature records. On September 15th, Canefield in Dominica recorded a daytime high temperature of 35.7°C. One day later, Point Salines in Grenada recorded 34°C. According to the US National Weather Service, Aguirre in Puerto Rico recorded 100°F (37.8°C) on September 17th.

The Caribbean Heat Season, the time of the year during which most heatwaves occur, has since 1995 been from May to October since about 1995. The peak period occurs during the months of August and September when high humidity coupled with reduced wind speeds increases heat discomfort.

According to CIMH Climatologist Dr. Cédric Van Meerbeeck, September 2020 was the warmest of any month in the historical record in terms of daytime high temperatures in Aruba (34.3°C), Mabaruma, Guyana (33.4°C), at Martinique’s international airport (32.9°C) and in Saint Lucia (32.4°C at the Hewanorra International Airport). Also, Freeport in The Bahamas, Dominica, and Tobago recorded their warmest September since at least 1980, 1975, and 1968, respectively.

FULL STORY ON WMO WEBSITE
Back To All News