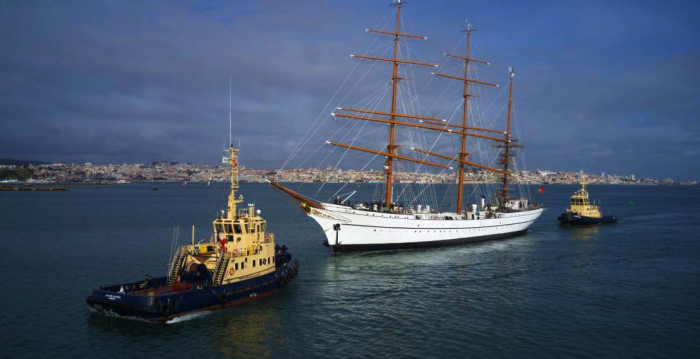 INESC TEC, together with the Portuguese Navy, within the scope of the Space Atmosphere Ocean Interactions in the Marine Boundary Layer (SAIL) project, is helping to equip the Sagres School Ship. The vessel is being transformed into a true scientific laboratory that will allow a pioneer study in atmospheric electricity and climate change.

Campbell Scientific supplied the electric field meter sensors to enable INESC TEC to measure the vertical component of the atmospheric electric field at the earth’s surface. The geophysical data collected during the planned year-long voyage around the world will allow scientists to study the effects of climate change and increased atmospheric pollution on the planet’s global electrical circuit. Data could also inform long-term weather models for better prediction of future climate trends.

The Carnegie Curve
The Carnegie curve widely refers to the daily cycle of the Earth’s fair-weather atmospheric electrical field. In clean air, it shows an average daily fluctuation that follows universal time, regardless of measurement position.

The Carnegie curve is important because it provides a reference variation against which atmospheric electricity measurements are still compared to today. It is thought to originate from diurnal variations in atmospheric electrification associated with the different global disturbed weather regions.

The Mission
One of the scientific objectives of the voyage is to recreate the famous Carnegie curve of atmospheric electric field around the globe. The original data was collected 100 years ago, so scientists are interested if recent climate changes have affected the diurnal cycle of the Earth’s electrical circuit.

The choice of the instrument for this mission was driven by the high accuracy, sensitivity, field ruggedness, and reliability of the electric field meter made by Campbell Scientific.

The System
The CS110, Campbell Scientific’s electric field meter, is a research-grade, high-fidelity, low-offset sensor that measures the vertical component of the local atmospheric electric field. It has low power consumption, and is designed for critical lightning warning and research applications. The sensor has a reciprocating shutter design with a reliable earth-ground connection. The sensitive charge amplifier electrode has a leakage compensation circuit tolerant to contamination and salt spray.

The CS110 is integrated with a CR1000 Measurement and Control Datalogger that provides measurement, control, data processing, and final storage functions, as well as a flexible user-interface language (CRBasic) and variety of digital communication options.

The project also looks to assess the health of the ocean, which has a significant global impact on sectors such as fisheries, marine activities, or even energy, by collecting biological samples (fishes) for further laboratory analysis.

A follow-up case study will be done after the trip has been completed, which will showcase the actual data gathered and performance of the CS110.

READ FULL STORY AT CAMPBELL SCIENTIFIC WEBSITE
Back To All News