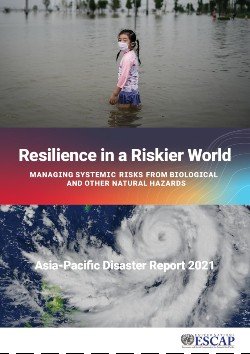 The Asia-Pacific region needs to step up efforts to prepare for and tackle complex, overlapping crises in order to increase the resilience of its people as well as its economies, with climate change threatening to dwarf the challenges of COVID-19 pandemic, a key meeting of the UN Economic and Social Commission for Asia and the Pacific has heard.

“Notwithstanding the progress made by many countries in devising more robust systems of early warning and responsive protection - with far fewer people dying as a result of natural disasters - the COVID-19 pandemic has demonstrated that  almost without exception, countries around the world are still ill-prepared to deal with multiple overlapping crises, which often cascade,” said Armida Salsiah Alisjahbana, UN Under-Secretary-General and Executive Secretary of ESCAP.

“Tropical cyclones, for example, can lead to floods, which lead to disease, which exacerbates poverty,” she told the ESCAP Committee on Disaster Risk Reduction.

Since the start of the pandemic, the region has been hit by multiple natural and biological disasters. At the same time, climate change has continued to warm the world, exacerbating the impacts of many of these disasters. The Asia-Pacific Disaster Report 2021, which was launched during ESCAP’s Disaster Reslience Week, shows that the pandemic, combined with the persistent reality of climate change, has reshaped and expanded the disaster “riskscape” in Asia and the Pacific.

The triple threat of disease, disaster and climate change is causing not only considerable human hardship but also significant economic losses. Currently, the annual average disaster-related losses are $780 billion. This could nearly double, to around $1.4 trillion, in a worst-case climate scenario. Choosing a proactive strategy of adapting to natural and other biological hazards would be far more cost-effective at an annual cost of $270 billion, said the report.

“If we fail with the climate change mitigation, the impact is going to be felt for centuries or even millennia, so the scale of the problem we are talking about when it comes to climate change, the scale is much bigger,” Prof. Taalas told ESCAP’s Committee on Disaster Risk Reduction.

The new report from the Intergovernmental Panel on Climate Change (IPCC) has highlighted the increasing severity of the physical impacts of climate change because of record concentrations of greenhouse gases. This includes long-term melting of glaciers, snow and ice cover, sea level rise and ocean acidification, which will last for centuries or even thousands of years, Prof. Taalas said in a video address.

The ESCAP Committee on Disaster Risk Reduction is charged with addressing the following issues: (a) emergence of cascading risks and extension of the disaster risk-scape; (b) scaling-up multisectoral cooperation frameworks to manage cascading risks; and (c) status of regional co-operation efforts.

WMO was represented in several expert group meetings, panel discussions and side events. WMO and ESCAP have a Memorandum of Understanding to work together to build resilience to climate and disaster risks and the promotion of impact-based early warning services and systems. The two organizations have a long history of cooperation by jointly establishing the Typhoon Committee.

Prof. Taalas stressed the importance of building capacity in Least Developed Countries and Small Island Developing States to adapt to climate change and build resilience, in particular through investments in early warning services.

However, major gaps in observing systems in many parts of the world, including islands and least developed countries in the Asia-Pacific region, have a negative impact on the quality of early warning services. WMO’s new initiative, the Systematic Observations Financing Facility (SOFF) seeks to close these gaps and leverage sustainable financing.

FULL STORY
Back To All News