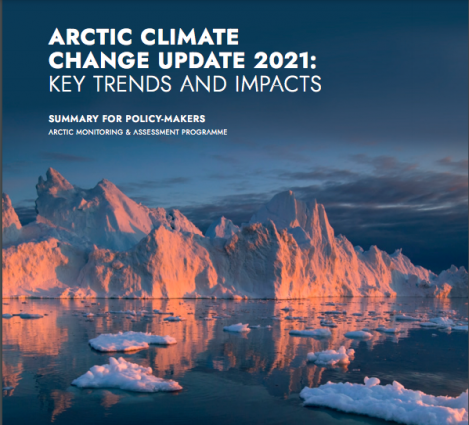 New observations show that the increase in Arctic average surface temperature between 1979 and 2019 was three times higher than the global average during this period – higher than previously reported - according to the Arctic Monitoring and Assessment Programme (AMAP).

Climate change impacts on Arctic communities, ecosystems and species, especially when associated with extreme events, are considerable and accelerating. Sea ice loss, glacier retreat and reduced snow cover remobilizes previously deposited contaminants. While climate change is mainly driven by carbon dioxide emissions, changes in emissions of air pollutants such as short-lived climate forcers also affect the climate as well as human health. Globally, such air pollution is a major cause of premature deaths and reducing air pollution from particles and ozone could prevent hundreds of thousands of premature deaths in Arctic Council Member and Observer countries, it said.

The Arctic Climate Change Update 2021: Key Trends and Impacts. Summary for Policy-makers was presented at the Arctic Council Ministerial in Reykjavik, Iceland on 20 May.