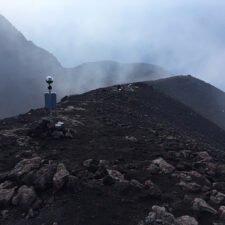 Volcanic activity and imminent eruptions can be detected with a novel new lightning warning system. In 2020 alone, the Smithsonian Institution recorded 67 confirmed volcanic eruptions from 63 different volcanoes. Of these recorded instances, 22 were from new eruptions that began within the year.

Volcanoes are an incredible force of nature made even more incredible with the addition of plume lightning, which can be spectacular. When a volcanic eruption is imminent, there are government procedures in place to keep the threat to life to a minimum. Any improvements or enhancements to advanced warnings would be very beneficial in managing and protecting the affected local inhabitants.

Volcanic lightning, what is it?

Volcanic lightning is formed in a volcanic plume during an eruption. Under certain conditions, the cylinder-shaped column of volcanic ash emitted by the erupting volcano can generate lightning within the ash cloud itself. Volcanoes that do not create an ash plume, usually also lack volcanic lightning, like those in Hawaii, which are more likely to eject fluid lava fountains than thick plumes of ash. The tiny ash and glass particles that make up a volcanic plume are tightly compressed beneath a volcano. As these densely packed particles are violently ejected in a volcanic plume, they rub against each other and become charged. As these charged ash particles ascend into the less-dense volcanic plume, the plume experiences charge separation. When this charge separation becomes too great for air to resist the flow of electricity, the air breaks down and lightning is generated within the volcanic plume.

Can it be foreseen?

The Mount Vesuvius eruption of 79 AD was the first recorded case of volcanic lightning. With volcanoes known for their unpredictability, the monitoring and collection of lightning data from volcanic eruptions could be very helpful to volcanologists and atmospheric scientists to help them to better understand eruption dynamics. This new data could be a valuable resource for volcano monitoring and can be captured through the use of a dedicated lightning warning system.

Biral’s BTD-200 Lightning Warning System, which gives advance warning of overhead lightning risk using a professional-grade quasi-electrostatic detection system, is designed for use in a number of applications and has been successfully trialed in detecting volcanic lightning activity and getting data for imminent eruptions.

To test the BTD-200’s technology and sensitivity, sensors were positioned on Sakurajima volcano in Kyushu, Japan and at the top of the Stromboli volcano off the north coast of Sicily to collect data during volcanic activity. Despite being just a few 100m from the crater, the sensor on Stromboli’s survived a large explosive eruption on 3 July 2019.

In addition to cutting-edge research on plume electrification, the latest research by Dr Corrado Cimarelli (University of Munich) and his team suggests that the BTD-200 is indeed very sensitive to ash cloud electrification produced by even small volcanic eruptions and is therefore likely to be a useful and sensitive tool for continuous real-time monitoring of explosive volcanoes. This technology is essential for early warning of volcanic hazards, both for the people living nearby and also for aircraft flying past or near-to the volcano.

The BTD-200 lightning warning system is a complete detection and warning system which has been developed from the Biral range of professional aviation grade lightning detection systems. It reliably detects the presence of all forms of lightning out to a range of 35km (22 miles) using a novel quasi-electrostatic detection principle. This very sensitive method detects small changes in the charge state of the atmosphere in the local area and is even able to measure the charge on falling precipitation. Designed to be installed and set up by non-technical staff, it comes with a power supply and the essential PC application ‘Lightning Works’, for monitoring and warning personnel of approaching thunderstorms. The optional ‘Lightning Works Messenger’ application then works seamlessly with Lightning Works and automatically sends out email and SMS text messages to any number of site managers and remote staff.

The Lightning Works software alerts the staff and managers to threats in real time, allowing them to review and manage the situation and to alert staff to the potential danger. It can also activate warning sounders automatically if required.

Full story on Biral website
Back To All News